When I was writing my 7th book, The Library Kids House of the Dragon, I needed to do some research on India since the children must retrieve a crystal in India.  As part of my research I studied a little bit of Hinduism and visited a Hindu temple.  Hinduism is a very complex religion with millions of gods and goddesses but with a set of main god/goddesses.  I am still trying to study and understand the various sects of Hinduism as I find it to be a very interesting religion.

I visited one of the most beautiful Hindu temples I have ever seen.  It is known as the BAPS Mandir.  I was allowed to take pictures of the outside of the temple, but not on the inside.  The wood for the temple was carved and shipped from India as was the stone.  The inside of the temple was illuminated with changing soft lights and the carved marble had the stories of the past.  Here are some of the pictures from the outside. 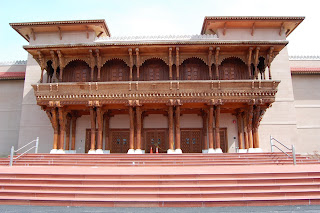 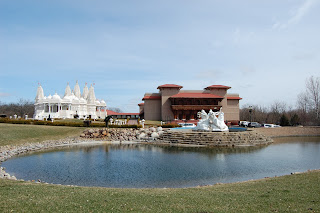 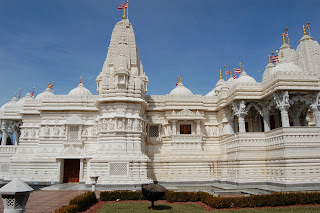 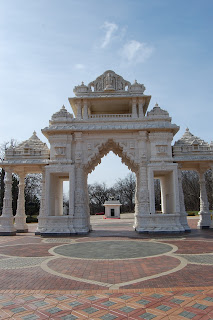 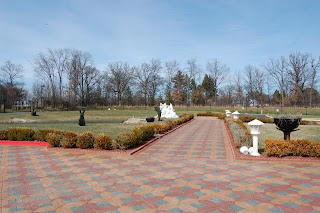 I want to tell you a story about a haunted place called Aztalan that I visited to do research for my second book of the series, The Library Kids The Serpent of Rock Lake.

Aztalan is a mysterious place near Rock Lake (Lake Mills, Wisconsin).  The site was abandoned and no one knows why to this day.  There are stories of fights between the inhabitants and Red Horn of the Ho-Chunk. Aztalan state park is Wisconsin's most important archaeological site.  The remains are from a Mississippian  peoples’  village that existed between A.D. 900 and 1300. 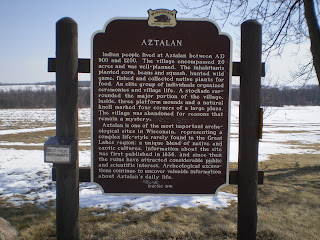 I decided to visit this mysterious place during the winter and see for myself what the place looked like.  I went to the main park and got out to see the Crawfish River.  I saw the large pyramid mounds, next.  There were 3 of them as the brochure had mentioned.  No one was there and the place was absolutely peaceful.  It felt like home, to me.

I walked through the snow, to the large pyramid and walked up the steps.  I walked to the top where the snow had melted and I looked around.  I felt as if I had been there before.  I noticed the stockade fence and wondered what it was like for the inhabitants who lived there. 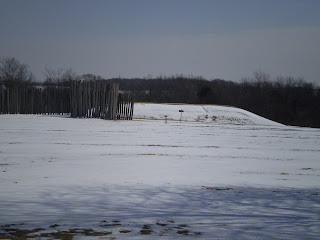 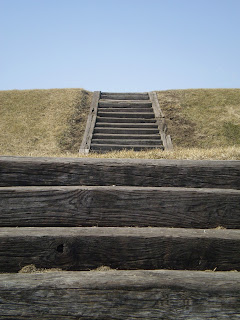 Next I drove to the Princess Mound.  The Princess Mound contained the body of a woman who was in her twenties when she died.  She was buried with 3 shell belts that contained various shells.  Some of them came from the Gulf of Mexico.  It was an unusual burial and the woman was thought to be some one of importance or perhaps someone who had died under a unique condition because her burial was away from the other burial mounds and her belts were elaborate.  Perhaps this woman was murdered. 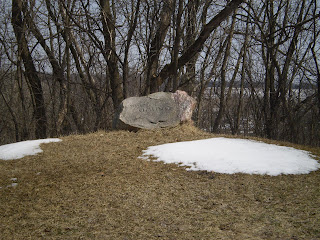 I got out and again, no one was around.  There were no animals and the museum was closed.   There was some snow on the ground there as well.  I began to take pictures of the princess mound and then I heard it.

I looked all around, but there was nothing.

I turned again and took one more picture and then the noise came back again, right behind me.

Again for the 3rd time, I turned and could find nothing that had caused the sound.  At this point, I decided it was time for me to go.

Perhaps that mound is haunted as others have said it is.  And the sound I heard was from the shell belts of the Princess who didn’t want me to be alone at the mound.

She let me know that she was still there.

Posted by RitaJeanMoran at 4:19 PM No comments:

Here is an interesting site to learn about inventors of the past:


By Rita Jean Moran (www.thelibrarykids.com)
Posted by RitaJeanMoran at 7:10 PM No comments:

Email ThisBlogThis!Share to TwitterShare to FacebookShare to Pinterest
Labels: Edison

The Sounds of Outer Space Thanks to NASA

I've found some interesting videos that have the sounds heard from the planet Jupiter as recorded by NASA.  Apparently, the interaction of the atmosphere and the electromagnetic field of the planet make these sounds.  Here is the embedded video:


They have a lot of interesting things including an explore club for kids:


And some very good resources for educators:


They even have NASA TV:

Posted by RitaJeanMoran at 9:36 PM No comments:

Email ThisBlogThis!Share to TwitterShare to FacebookShare to Pinterest
Labels: NASA

Caesarion, The Last Pharaoh of Egypt

Caesarion was the child of the last Cleopatra of Egypt and Julius Caesar.   He was born on June 23, 47 BC.   Cleopatra VII brought him to live in Rome with his father.  When he was 4 years old, his father was killed and Cleopatra took Caesarion back to Egypt to be co-ruler with her.


After his father was killed, Cleopatra married a man named Mark Antony and had 3 children with him (Alexander Helios, Cleopatra Selene, Ptolemy XVI Philadelphus).


Caesarion was proclaimed a god, son of god and "King of Kings" when he became pharaoh.  A man named Octavian wanted to be ruler of Rome and all of its territory.  He fought Mark Antony and Cleopatra for it.  Cleopatra sent Caesarion away to live in India when he was 17.  Octavian defeated Cleopatra and Mark Antony.  He alledgedly invited Caesarion back to Egypt to be the ruler and then had him executed in Alexandria (at the age of 17) and then declared himself Pharaoh and renamed himself Caesar Augustus.


But did he really have Caesarion executed?  There seems to be some controversy with this.   Perhaps Caesarion survived.

Posted by RitaJeanMoran at 6:15 PM No comments:

The Oracle of Delphi was a chosen priestess who was alledgedly able to tell the future.  She was also called The Pythia. The Oracle was located in Greece and she was originally the priestess of Gaia.  The priests of Apollo invaded Greece and the temple was then dedicated to Apollo.

The Oracle was consulted for many important things.  As the old religions began to fade away, so too did the Oracle of Delphi.

Posted by RitaJeanMoran at 5:55 PM No comments: