The Sumerian Enki is the Greek Zeus 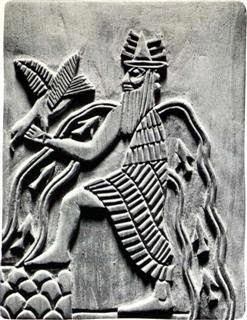 Enki helps create a slave race, just as Zeus did.  Enki has affairs with many women including Ninhursag and her daughter, just as Zeus did with Demeter and Persephone.  Enki is a water god and god of wisdom which are all associated with agriculture.  This is the early adulthood of Zeus when he was learning from his father Cronus, the methods of farming. His symbols include the phoenix and the bull, just as Zeus includes the eagle/phoenix and bull as his symbols.  Enki's other symbols include water (irrigation) and an ibex (goat-lamb) which matches the ibex's of Crete and their irrigation and advanced piping systems where Zeus initially took up residence.

Without a doubt, Enki is the Greek Zeus.


Posted by RitaJeanMoran at 9:23 AM