I just read an article about a group of men who want to destroy the ancient ruins in Egypt because they consider them pagan.  Unfortunately, many artifacts have already been destroyed (the Buddha statues, the Alexandrian Library, the Mayan Codices, and much more) because men want to rewrite history and be in charge of other people.  There is still much to learn from the past.  To not know your past is a sure way to repeat it.  To allow others to rewrite and hide the past is a sure way to be their "slave."

It is said that Osiris was murdered by his brother Set.  His body was dismembered and it is said that his head is buried in Abydos.  Perhaps this is not a myth, but rather a true piece of history.  After doing a lot of research, I found an interesting story about the first king/pharaoh of Egypt who went to war to create Egypt.  His name was King Menes.  Some believe he is also named Narmer and possibly King Scorpion.  The Turin and Abydos king lists site him as the first pharaoh of a united Egypt and the founder of the first Dynasty of Egypt.  The capital of Egypt was Memphis (near Cairo, today).

The Narmer palette shows a view of his conquests. 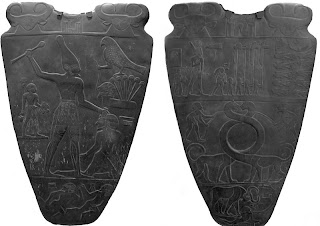 
This palette is dated to around 3100 B.C., that is about 5100 years ago.  King Narmer was married to Queen Neithhotep and had one son name Hor-Aha.  Narmer was killed by a Hippopotumus.  His son was also menaced by a Hippopotumus.  The Hippopotumus was a symbol of Set so is this recorded piece of history reflecting the real Osiris?  Hor-Aha had 4 sons:  Djer, Rhejet (Rhjt), Heti (Htj) and Saiset (S3jst).  The Horus of legend had 4 sons who became the symbols on the 4 canopic jars used for burial.


If this was the historical Osiris, then it is very important to preserve the history of the world whether your religion agrees with it or not.  It is significant because Osiris was a demi-god giant who was around during the time of his father, Geb, and this gives a very important time-line to the past.


It is said that Osiris or King Narmer may have been the biblical Nimrod.  He appears to also be the legendary Dumuzi, Bacchus, Dionysis, Queztlcoatl, Kulkukan, Viracocha, Red Horn, Lono, Balder, Vritra, and many other names.  These are global legends about the same person who appears to have part of his body burried in Egypt.  It was said that Osiris civilized the world.  He created Egypt, travelled around the world and taught humans the art of agriculture and farming (humans were said to have devolved into cannibalism at this time) and many other "mysteries."


We need to study the past so that we know who we are, not destroy the past so someone can play world tyrant.  Just think of all the information that went up in flames when the Library of Alexandria was burnt to fuel bath houses.  I also personally believe there is a another female sphinx burried under the sand.  I believe the one you see represents Horus or Hor-Aha and the one burried represents his mother, Isis or Queen Neithhotep.  The dream stele of Thutmose IV not only shows two sphinxs back to back, but it also shows an underground chamber below the sphinx.  Can you imagine what is in there?  I can and I wrote about it my 6th book, The Library Kids The Pharaoh's Clue.  Here is a picture of a reproduction of the dream stele that sits between the paws of the Great Sphinx: 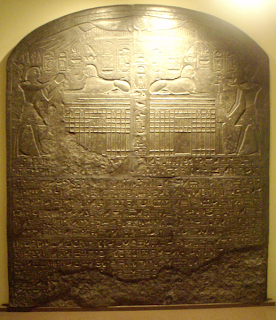 Posted by RitaJeanMoran at 6:50 PM