Did Osiris Have an Electrical Device that Made Electricity?

There are some very interesting pictures from the tombs and artifacts of ancient Egypt.  Of particular interest is the Djed of Ptah.  It is a common Egyptian symbol representing stability.

http://en.wikipedia.org/wiki/File:Djed.svg
The symbol was associated with Ptah and later with Osiris.  According to wikipedia, a strange ceremony called "Raising the Djed" was done every year by the priests of Egypt:

The djed pillar was an important part of the ceremony called 'raising the djed,' which was a part of the celebrations of Heb Sed, the Egyptian pharaoh's jubilee celebrations. The act of raising the djed has been explained as representing Osiris's triumph over Set.[9] Ceremonies in Memphis are described where the pharaoh, with the help of the priests, raised a wooden djed column using ropes. The ceremony took place during the period when fields were sown and the year's agricultural season would begin corresponding to the month of Choiak, the fourth month of the inundation season called akhet. This ceremony was a part of one of the more popular holidays and celebrations of the time, a larger festival dedicated to Osiris conducted from the 13th to 30th day of the Choiak month. Celebrated as it was at that time of the year when the soil and climate were most suitable for agriculture, the festival and its ceremonies can be seen as an appeal to Osiris, who was the God of vegetation, to favor the growth of the seeds sown, paralleling his own resurrection and renewal after his murder by Seth.


What is interesting to me are some artifacts that have the Djed attached to a light bulb looking object.  See for yourself: 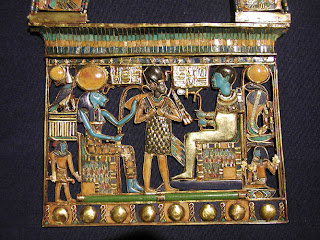 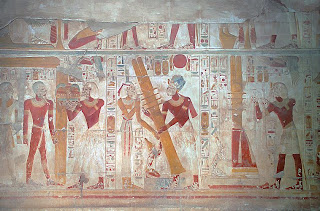 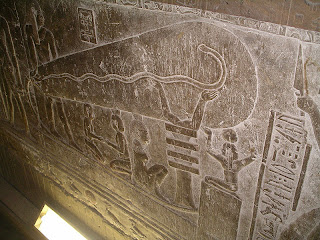 http://en.wikipedia.org/wiki/File:Dendera_light_002.jpg
Perhaps there is a hidden past that has been covered up on this planet.  The artifacts that suggest it, usually disappear from public view after attention is brought to them.  The Baghdad battery may also support the idea that the ancients used electricity to light their residences and to do electroplating.

Posted by RitaJeanMoran at 9:56 AM